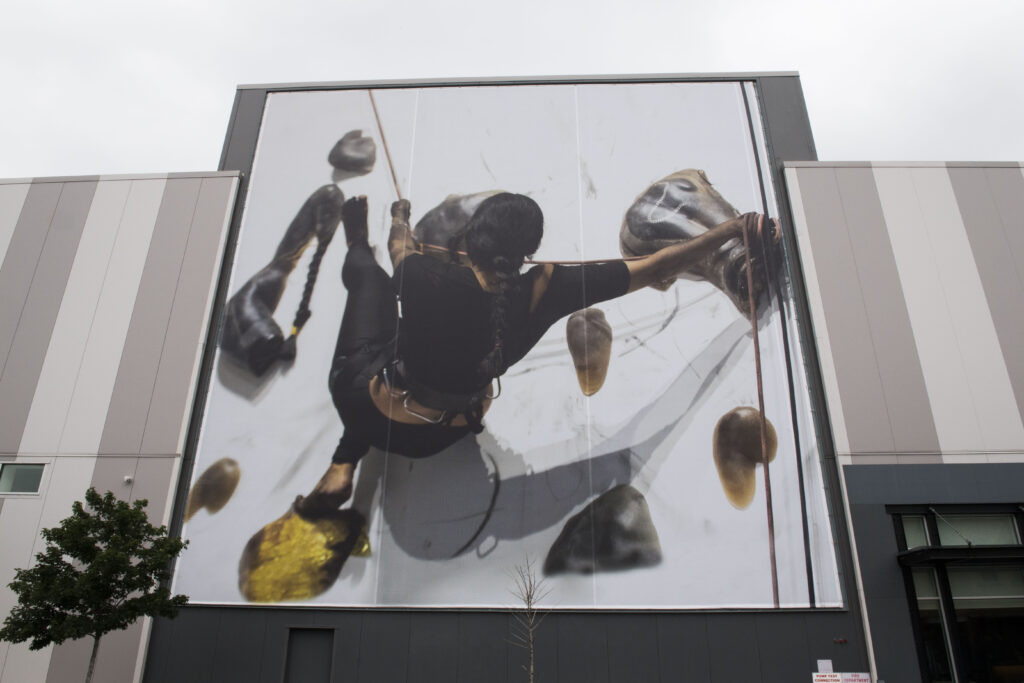 A large-scale image of Baseera Khan performing their multi-disciplinary work Braidrage (2017-ongoing) is now on view at UOVO’s Brooklyn facility in Bushwick. Photo by Elena Olivo.

UOVO has unveiled a new public art mural by Baseera Khan, recipient of the Brooklyn Museum’s second annual UOVO Prize, on the façade of its Brooklyn facility in Bushwick. Commissioned on the occasion of the UOVO Prize, the 50×50-foot installation features a large-scale image of Khan performing Braidrage (2017-ongoing), their best known, multi-disciplinary work bridging sculpture, video, and performance. The mural unveiling coincides with the announcement of Baseera Khan: I Am an Archive, the artist’s first solo museum exhibition, to be presented by the Brooklyn Museum this fall as part of the UOVO Prize. Curated by Carmen Hermo, Associate Curator, Elizabeth A. Sackler Center for Feminist Art, the exhibition will be on view October 1, 2021-July 10, 2022. Khan’s UOVO Brooklyn mural is on view to the public now through mid-2022.

Braidrage, as visualized in the UOVO mural, features the artist climbing a wall of 99 resin casts of their own body, using the techniques of indoor rock climbing as a metaphor for overcoming personal and colonial traumas with rage and strength. The body forms are embedded with fragments of hypothermia blankets, gold and silver chains, and synthetic and real hair imported from India, signifying internalized trauma in a field of collective pain experienced by women of color globally. The artist is captured from behind in a moment of active ascent, their identity and gender obscured. As they climb, their hands and feet mark the white wall with smudges of charcoal, transforming the act of climbing-as-art into a form of drawing-in-space. As a queer femme Muslim, Khan’s mural brings their varied identities and experiences, not often seen in media or art, into the space of the street and at an undeniable scale.

Braidraige is an integral part of Khan’s practice whereby the artist unpacks mechanisms of othering, surveillance, cultural exploitation, anti-blackness, and xenophobia within our public and private spaces and proposes avenues for protection and liberation. Khan’s solo exhibition, I Am an Archive, at the Brooklyn Museum this fall will feature six new sculptures, installations, and collages in conversation with key works made since 2017.

“Seeing Baseera Khan’s important Braidrage performance at this scale is stunning,” Carmen Hermo, Associate Curator, Elizabeth Sackler Center for Feminist Art at the Brooklyn Museum, remarked. “The mural brings the artist’s tenacious, layered practice into the neighborhood, while also acting as a kind of fierce, femme response to the advertising and public art landscape of the city at large.”

UOVO Founder and Co-Chairman, Steven Guttman, said of the mural: “We are honored to have Baseera Khan’s conceptually rich and visually stunning work on display at our Brooklyn facility as part of the UOVO Prize. Khan’s inclusion continues the tradition of the UOVO Prize, inaugurated last year, to support an emerging Brooklyn-based artist and to engage our local community. We are thrilled that Baseera Khan was chosen as the second annual UOVO Prize winner, and we look forward to their solo exhibition at the Brooklyn Museum later this year.”

The UOVO Prize is an annual award given by the Brooklyn Museum to an emerging artist in Brooklyn. The winner receives a public art installation at UOVO’s Brooklyn facility, a solo show at the Brooklyn Museum, and a $25,000 unrestricted cash grant. As part of UOVO’s extensive commitment to the communities in which it operates, the UOVO Prize aims to engage the Bushwick community and bring art to the public in a meaningful and sustained manner. Now in its second year, the Prize is one of many ways in which UOVO supports local artists and institutions.

About the Brooklyn Museum
Founded in 1823 as the Brooklyn Apprentices’ Library Association, the Brooklyn Museum contains one of the nation’s most comprehensive and wide-ranging collections, enhanced by a distinguished record of exhibitions, scholarship, and service to the public. The Museum’s vast holdings span 5,000 years of human creativity from cultures in every corner of the globe. Collection highlights include the ancient Egyptian holdings, renowned for objects of the highest quality, and the American collections, which are unrivaled in their diversity, from Native American art and artifacts and Spanish colonial painting, to nineteenth- and early twentieth-century American painting, sculpture, and decorative objects. The Museum is also home to the Elizabeth A. Sackler Center for Feminist Art, which is dedicated to the study and exhibition of feminist art and is the only curatorial center of its kind. The Brooklyn Museum is both a leading cultural institution and a community museum dedicated to serving a wide-ranging audience. Located in the heart of Brooklyn, the Museum welcomes and celebrates the diversity of its home borough and city. Few, if any, museums in the country attract an audience as varied with respect to race, ethnicity, socioeconomic status, educational background, and age as the audience of the Brooklyn Museum.

About UOVO
UOVO is the premier provider of storage and services for art, fashion, and cultural artifacts. With 7 state-of-the-art facilities in New York, Delaware, and Florida, UOVO offers bespoke solutions to meet the specialized needs of any collection. Our services include climate-controlled storage, private viewing galleries, transportation, installation, packing, in-house photography, and digital inventory management. Each UOVO facility is purpose-designed and managed by a team of industry-leading experts dedicated to the highest caliber of security, discretion, professionalism, and care.

NEWS
See more News & Events
Images and content on UOVO.ART are copyrighted and cannot be downloaded or used anywhere without prior consent. 2022 UOVO© All Rights Reserved
The UOVO website and the UOVO App use cookies to improve your experience. We'll assume you're ok with this, but you can opt-out if you wish.Accept Read More
Privacy & Cookies Policy